The Room (2003) is a romantic tragedy that is written, produced, directed and starring Tommy Wiseau. Wiseau plays Johnny, a successful banker who currently lives with his fiancée Lisa. However, she gets bored and decides to seduce Johnny’s best friend, Mark, and this leads to heartbreak and chaos between the group.

This film is just perfectly made from start to finish. Wiseau has written a script that really develops all of the main characters, particularly his role of Johnny. Johnny is truly the man of dreams, and it’s just heartbreaking to see him be cheated on by his best friend. We know that Johnny and Mark are best friends, so that emotion comes through so much more. This is even more powerful as we get to not only see the strong connection between Johnny and Lisa, but also see the moments between Lisa and Mark.
If one character is going to steal the show here, it has got to be Denny. He was an essential character to this story, and the only person that seems to be there for Johnny. There are other essential roles for this film such as Peter, their psychologist. Peter goes through so much development throughout, it’s as if he is a completely different person by the end of the film. 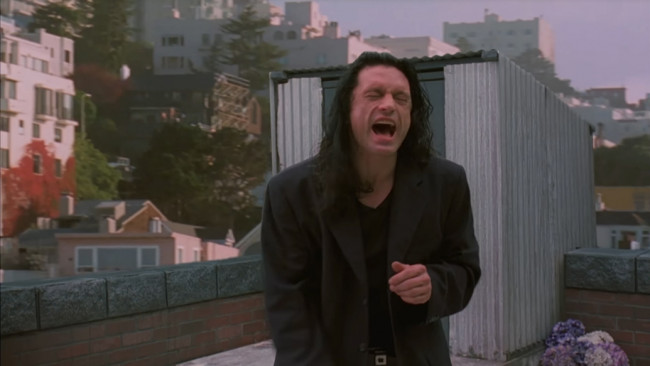 This film has some really tough themes that it deals with outside of the breaking relationship. Some of these themes include cancer, drug dealing and suicide. They may only be included for a small amount of time, and the cancer and drug dealing sections may not affect the rest of the film, but they are highlighted and given a true shining moment to highlight the importance of those issues.
Everything about this film just looks so beautiful. The sets all look so real, and there are a lot of references thrown into the film. From spoons to American footballs, there is always something important to spot in every frame. Wiseau knows how to frame a film as well, whether it is using a long tracking shot over the Golden Gate bridge to the extreme close-ups done during the sex scenes to make it feel more personal. This film is just stunning to look at.

I am simply stunned at how the Oscars looked over this masterpiece, given how much dedication Tommy Wiseau put in to market and fund this film, keeping it in theatres for two weeks just so it could qualify for the Oscars. This is a true form of storytelling and regarded as a classic for obvious reasons. You must check this film out. Forget Citizen Kane, it’s all about The Room.
5/5
Have you seen The Room yet, and if not where have you been? Let me know your thoughts on this masterpiece and let’s have a conversation.
Happy April Fools everyone!