Le Mans ’66, or Ford v. Ferrari (2019) is a car-racing biopic drama that retells the story of the events held at the famous racetrack, Le Mans, in 1966. Directed by James Mangold, this film stars Matt Damon and Christian Bale as leads, with a supporting cast including Jon Bernthal, Caitriona Balfe and Noah Jupe. When Ferrari refuses the offer of Ford to buy their company, the head of Ford hires Carroll Shelby (Damon) to help create a race-car to beat Ferrari once and for all, with the help of driver Ken Miles (Bale) to drive them to victory. 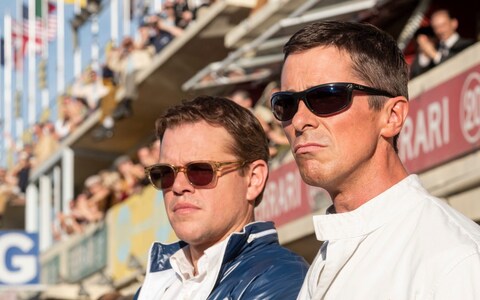 With both Damon and Bale campaigning for Best Actor at the Oscars this year, I have a feeling they may cancel each other out due to how incredible they both are. They both have to give emotional performances, yet also show passion and care for cars and know what they are talking about. If I had to pick one to nominate for the Oscar, I think Bale is given more to work with on an emotional level so he has the slight edge here. In terms of the supporting cast, Jon Bernthal is fantastic here and I am glad he is finally given a slightly substantial role in a major-release picture. Noah Jupe is also fantastic after his success in A Quiet Place and is making his name as one of the best child actors working to date.

With the film clocking in at two-and-a-half hours, this could have easily dragged on and become messy in terms of tone for a story like this. However, the script is incredibly smart in not only balancing the narrative of the film, but also the tone. This film is not your cheesy cheerful biopic like others have been recently, and yet it is not hard to watch due to an upsetting and sombre tone. There are moments of humour which have the entire audience laughing, moments of suspense when the characters are in danger and moments of sadness which hits on an emotional level.

I am not a person that is a huge fan of car-racing films. In fact, I am somebody who usually avoids car films and disses car-chase sequences appearing frequently. However, this film found a balance of handling the themes of car-racing and being a dramatic and character piece. The car sequences not only feel real, but they are detailed and well-explained to an audience who may not know much about the subject matter. Even if you are not excited about seeing a film about cars, there is so much more to the film than what it seems.

This film could easily pick up a bunch of technical awards at the Oscars, and I would be quite happy if it got those nominations at least. This film is stunning to watch due to the cinematography done by Phedon Papamichael. He has already been nominated for an Oscar for Best Cinematography before, and I would not be shocked if he is once again here. The production design and the work done on all the cars here are also incredibly done and helps take the audience back into the 1960s.

If there is one set of awards that this film is going to win big on, it is the sound categories. Given the sound of the car engines that feature heavily here and a balance between their volume and pitch in comparison to the incredible score and the conversations that go on in between these sequences, the balancing of these sounds is perfectly done. In the racing sequences, you actually feel like you are there watching the cars drive by and that you are actually in the car. The technical elements of this film overall are unmatched so far in any film I have seen this year.

If I had one thing I wanted this film to focus on a little more, it would be Carroll Shelby’s background. The only real context behind his background that we get is that he won Le Mans previously, in comparison to the family connection we are given about Ken Miles. This made me more emotionally connected to Miles and I just wish I could have had the same connection to Shelby and their relationship overall. This film may be two and a half hours long, but it earns every minute of that runtime. It does not feel this length at all, as there is so much going on the screen to entertain you. This is a pretty accurate biopic that is also enthralling and leaves you completely caring for the characters and what they go through. Le Mans ’66 had me hooked right from the beginning and it has easily become one of my top films of the year so far.

Did you get a chance to check out Le Mans ’66? Did you love it as much as I did, or did the runtime leave you feeling drained? Let me know in the comments section and let’s have a discussion.