Charlie’s Angels (2019) is a reboot of the well-known franchise, but with a feminist twist to the story. Directed by and starring Elizabeth Banks, this film also stars Kristen Stewart, Naomi Scott, Ella Balinska and Patrick Stewart, with recognisable faces popping in and out of the film. When programming engineer Elena (Scott) plans to expose her company of covering up dangerous aspects of her design, Calisto, the Angels are sent on a mission that is more than what it appears to be at first glance. 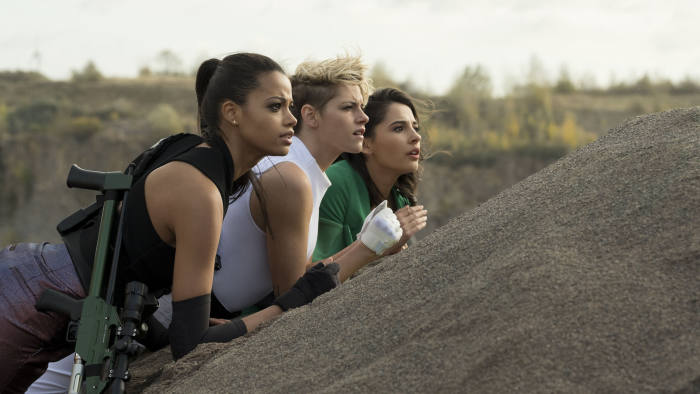 Despite what you may think about this style of filmmaking, this film is actually visually pleasing to watch. It may not be revolutionary, but the individual aspects tie in really nicely to create a captivating experience. The costume designs, as you can imagine, are stunning and I want every single outfit for myself. The work on the production design and all of the beautiful locations we get to explore are eye-catching and well represented, showcasing various aspects of each country. The landscapes are also captured by some stunning use of cinematography, particularly in the extreme long shots used to set up the scene.

The performances from each of the three main ladies in this film are all completely different in their own ways but excellently done. Kristen Stewart is having a lot of fun in this role, which I enjoy seeing coming to life in films like these. Naomi Scott continues to be a standout of the year, following her incredible performance in Aladdin to this. It is a much different role, but she fits the character so well that it feels completely natural. This was my first exposure to Ella Balinska, but once again her role felt natural to her and she was a scene-stealer in every shot she was in.

The world-building of the Charlie’s Angels programme was well established and mixed a balance of fantasy and technology to create quite a unique blend. There are certain sequences that remind me heavily of the Kingsman franchise, which is not a bad thing at all as this is clearly not a direct rip-off of it. This just felt like the team had a lot of fun with what they could do and how far they could push without seeming completely ridiculous, and due to the fun tone of the franchises beforehand it could go a little further than other films would potentially risk doing.

The stunt work in this film is not anything too spectacular I would say, but the fight sequences do look fantastic. Despite all of the uses of technology and fantasy aspects of this film, the fight sequences actually looked realistic and brutal. There is one moment in a fight near the end of the film which is completely brutal and I loved how bold the film actually went to do that and pull it off. I also found that the balance of fight sequences worked, having a fair amount leading up to the final battle and a major showcase for the last third of the film that does not disappoint.

This film tries to have several twists and turns throughout, but to me they do fall a bit short. I am not sure whether it is because they are twists that feel repetitive and formulaic in the Hollywood narrative, or if I had just seen it coming, but I was never fully surprised or impacted from any of the major twists. Not being fully invested in the story and finding the plot a bit predictable does take away from some of the enjoyment of the film, unfortunately.

I also wished that some characters didn’t feel quite one-dimensional. The leading ladies are fleshed out as characters, but a lot of the side characters feel like they are there purely to drive the plot forward. The men of the film, Noah Centineo, Patrick Stewart and Sam Claflin, are all given very specific roles and they do not drift away from those roles. They are stereotypical versions of themselves, almost like caricatures, and I think having them fleshed out would have made for a stronger film overall and helped with some of the story aspects that I was not connected with.

Is this the most revolutionary filmmaking of even this past month? No, clearly not. However, that is not the point of this film. This is a film that needs to be judged on the basis of whether it was a fun time and entertaining. In the same reign of films such as Mamma Mia!, this is a film that I had fun with at the cinema and would stick on again with a few friends having a drink or two with and having a good time. If that is the main objective of this film existing, then it succeeds.

Have you checked out this reboot of Charlie’s Angels yet? Did you enjoy it for what it was, or was it a bit over the top for your liking? Let me know in the comments section and let’s have a discussion.