Jojo Rabbit (2019) is a satirical history piece focusing on the end of World War II in a comedic manner. Directed by Taiki Waititi, he also writes and stars in the film alongside Roman Griffin Davis, Scarlett Johansson and Thomasin McKensie. When ten-year-old “Jojo” Betzler (Griffin Davis) discovers that his mother (played by Johansson) is hiding a Jewish girl in their home, he struggles to deal with it as a Hitler Youth member and having an imaginary friend in Adolf Hitler (Waititi). 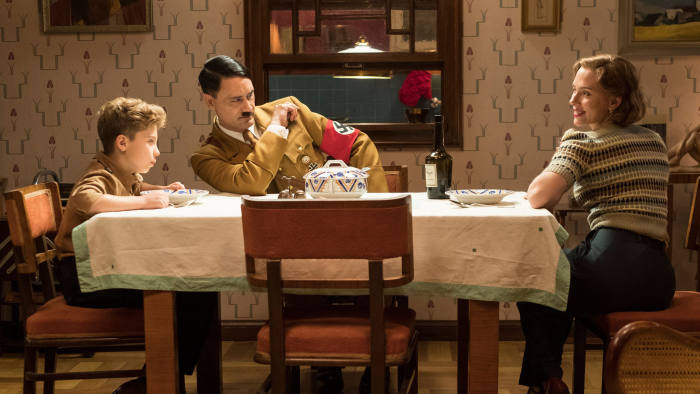 This film is make or break based on the character of Hitler and how he is used here, and Taiki Waititi does a fantastic job not only writing the script for the character, but also portraying him. There is a certain charisma he gives off which makes it so clear that this personification of Hitler is an imaginary one coming out of the mind of a young boy. From his humour to his exaggerated movements and loud performance, it is a fun role to watch unfold and the film also tackles the darker side of having a character like him be a central part of the story.

All of the performances here are superb, no matter what age or experience they have had. Scarlett Johansson continues to prove how great she is with another incredible performance that could score her double nominations come Oscar morning. Roman Griffin Davis is not only a great upcoming child actor, but he just is a fantastic actor who gives a fun yet emotional performance here. My favourite performance though may have to be Thomasin McKensie, who is given a smaller and quieter performance playing the Jewish girl stuck in the attic, but gives a haunting and ruthless performance in that role which still contains humour within all of her darkness.

This film is technically stunning to watch, and not for the reasons that most films are. Instead of focusing on the beauty of the cityscapes, I admire this film’s production design in terms of the interiors and the work done to bring the vision of Nazi Germany to life. From the propaganda pieces to the costume design and recreating the uniforms, it brings the audience back to a familiar ground. However, the film doesn’t go too far to recreate it so not to suck people into the darkness, so the crew add a fun editing style composing of bright colours, an upbeat soundtrack of familiar tunes and quick editing to match the light-hearted tone the film goes for.

The narrative of the film sounds crazy, particularly for an audience in this day and age where the image of Hitler alone can cause outrage for good reason. However, Taika Waititi is the perfect person to direct a film like this being a Jew himself to show the light in a dark situation. Most films set in the wars of the past century are presented as dark epics, and yet Waititi shows the human side of that by placing the perspective on a young and naive boy who believes that what he is doing is right. It brings not only humour but relatability and heart in a subject many people cannot bear to face anymore.

This film has a lot more emotion than I originally thought it would. It is still a comedy, but this film has a lot of weight and drama to it and some beautifully shot moments in it to emphasise the struggles of the main characters. There is a wonderful relationship developed between the mother and the Jewish girl that is well-realised and slowly developed, giving the audience time to process everything. There are several moments that will break hearts placed throughout the film, and yet they do not overshadow the humour and good-natured aspects of the film which still leave you thoroughly satisfied and cheerful by the end like Waititi has always been good at.

I only have a few small negatives that I picked up on through my watch. I was not sure what to make of the choice of having the film be in the English language but constantly remind the audience that it is a German location due to the use of German language on all of the propaganda, needing to tell the audience in English what is said on the poster. It would have been nice if they stuck to one or the other, and I would be interested to see what it would have been like in the native language of the story. I also felt that the character of Hitler was underused and having him appear in a few more scenes could have made the transition he goes through become more clear and have a stronger impact by the end of the film.

I went into this film expecting it to be a fun time pushing the boundaries of humour, and yet it did way more than that. I was not expecting this film to be as emotional as it is and this is such a beautifully told story. Simple in presentation but bold in direction, Taika Waititi has done it again and I cannot wait to go back and watch the rest of Waititi’s filmography.

Have you had a chance to check out Jojo Rabbit yet? Did you love it as much as I did, or did the humour not work for you? Let me know in the comments section and let’s have a discussion.