Fantasia (1940) is the third movie in the Walt Disney Animation Studios collection, and the first one to incorporate live-action sequences. Produced by Walt Disney and Ben Sharpsteen, this film features many directors who each worked on separate sequences. The film is composed of eight animated segments, in which a live orchestra weaves the film through each one, playing some of the most iconic pieces of music in history to unique stories. 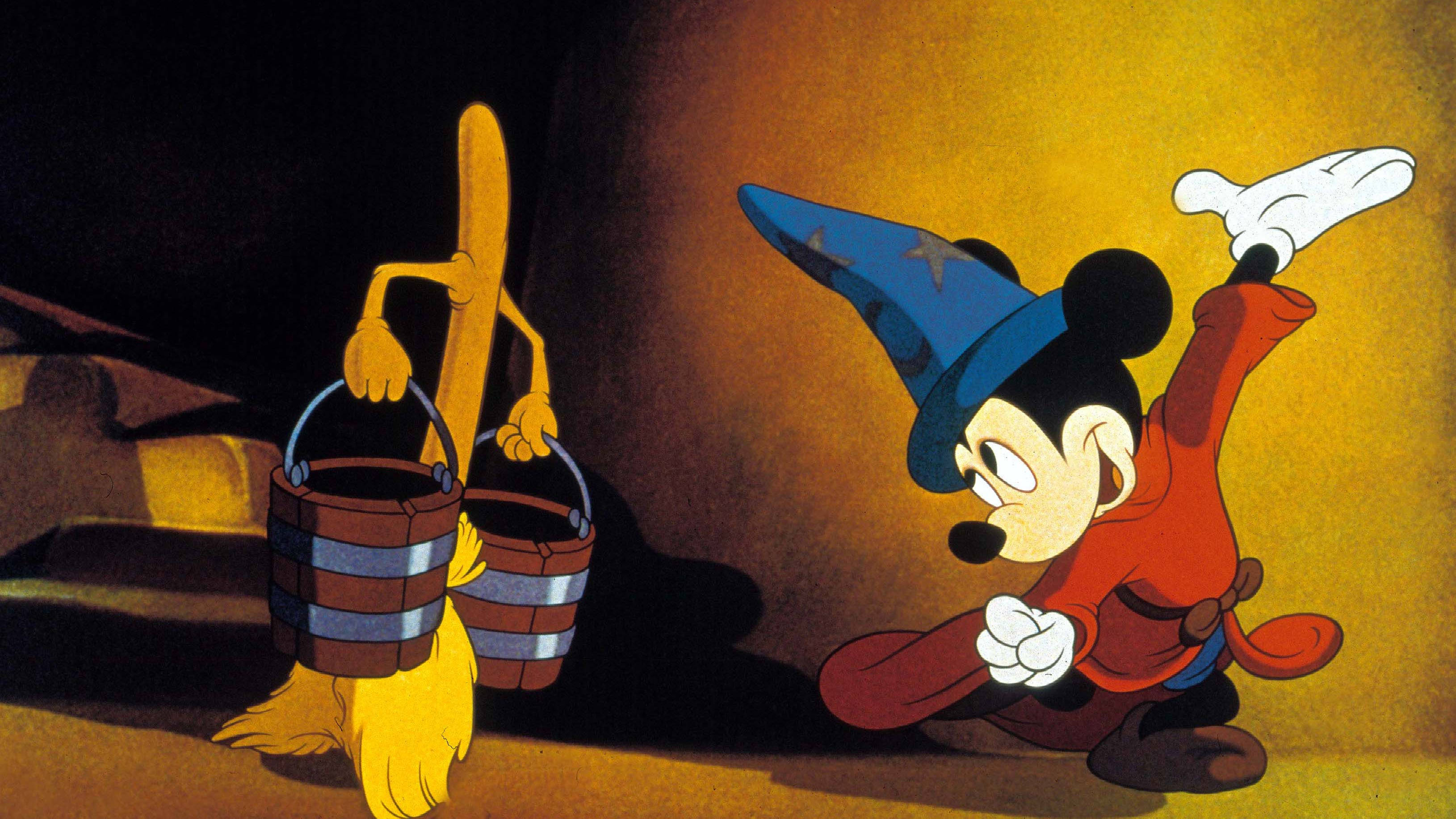 This is quite simply a format of storytelling that I simply cannot say I have seen from any other movie of this sort. Told in the format of an orchestral concert, I love the small details that were put in place, from the shots of the orchestra reading the music to the intermission that occurs halfway through the film. This is one of those films which goes beyond its traditional format and becomes more than a visual piece of entertainment, but an experience.
The team did so well picking the music to accompany this film, choosing a balance between softer pieces and heavy orchestral pieces that overall help create different tones for every single segment and their individual narrative. The animations itself is truly stunning, and it is incredible to see how the hand-drawn style has improved even over a couple of years between this and the studio’s first film, Snow White and the Seven Dwarves.
If we want to talk about this film, it is clear that the most known of the sequences, “The Sorcerer’s Apprentice”, is going to be mentioned. Marking the first appearance from Mickey Mouse in the feature film collection, it is clear why many people fell in love with the figure from this single sighting. This is a wonderful short film and one that truly captures the true magic of both Mickey and the brand of Disney as a whole.

My favourite sequence, however, may just be the very last one. Mixing two very different pieces of music together in Night on Bald Mountain by Mussorgsky and concluding with Ave Maria by Schubert to tell a dark story about a fictional devil named Chernabog is perhaps one of the darkest places I have seen the Walt Disney Animation Studio go. One thing I have realised looking back at the start of the studio was how bold they were going with their stories and how dark they could be, from this to the dark and twisted aspects in Pinocchio just previously. It is almost refreshing to see a Disney that was strong and also daring to go places that they sadly do not risk touching anymore.
Of course, with any collections of stories told in one place, there will be some that aren’t as strong or as memorable. Whilst I have so much appreciation for the amount of work that went in and how creative each piece truly was, when I look back on the film as a whole there are one or two that simply don’t work as well. In particular, I will point out that Dance of the Hours is quite forgettable, despite how adorable it is and how fantastical it can get. Sadly, being placed in between a wonderful segment animated to Beethoven’s The Pastoral Sympathy and the wonderful ending with Chernabog does not help make it stand out at all.

As a first time watch, seeing this format of storytelling and having a place to showcase not only the enhancements in animation in the early 1940s but also visualising iconic pieces of music in a very unique style is still captivating to watch. Whilst not every single sequence works for me, there is something for everyone here and there is still a high level of craftsmanship which has to be appreciated. For “The Sorcerer’s Apprentice” alone, this is easily worth a watch.
4.5/5
Have you checked out Fantasia, or is it also a blind spot for you? What is your favourite sequence in the film? Let me know your thoughts in the comments section and let’s have a discussion.